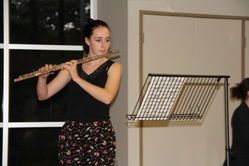 Anna commenced her music studies from the age of five and settled on the flute by eight. She has been studying with Kellie Grennan for several years, during which time, Anna excelled in her HSC music units at Fort Street High School.  Last year, Anna was awarded a distinction for her ATCL diploma in performance from the Trinity College London.  In 2011 she was awarded a distinction for her performance in the Flute Society of NSW’s eisteddfod. Anna was consistently a valued member of her school music groups, playing first flute in a number of orchestras. She participated in Jane Rutter’s masterclass held by Windworks in 2014, and has performed regularly at Windworks events and workshops since 2011.

Having worked with young students in a variety for fields over the last three years, Anna is patient and creative in teaching.  She has been a Kumon tutor since 2011, and upon completion of her ATCL certificate in Flute last year, she volunteered for the remainder of the year as an english and mathematics tutor in indigenous communities in the Northern Territory.


We are very excited to have Anna join our teaching team in 2015, and trust that her passion for teaching and flute pedagogy will be a great asset to our practice here.

"Kellie Grennan is a fine flutist and a devoted, caring and intelligent flute teacher.
Kellie has a high standard of playing which will benefit both advanced and beginner students. She has a well rounded, comprehensive understanding of the flute repertoire and she also brings a sense of fun to her flute lessons. Kellie is a highly respected and well loved member of the Australian flute community." (Jane Rutter - Free spirit classical Flute)